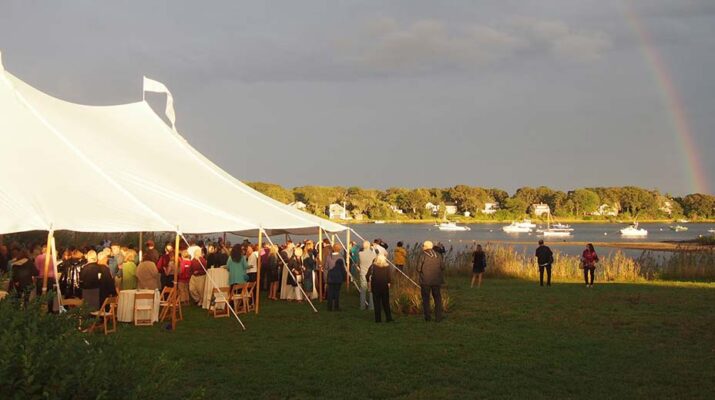 Welcome back to the cinematic celebration that is the Annual Martha’s Vineyard International Film Festival! This is our seventeenth year. Wow—how’d that happen? It is because of you, film lovers!

We are ecstatic to be back with you again, with this full five days of top films from around our planet. Plus, parties, special guests, and more! From September 6–11 you’ll be treated to an array of narrative and documentary films, animation, and shorts. Something for everyone! These films demonstrate the wonders of film, the range of its ability to make us laugh and cry, to make us think deeply as we take in these works’ bold imagery, creative storylines, and unique characters. Sit back, let cinema wrap you in its warm magic.

For seventeen years, the Annual Martha’s Vineyard International Film Festival has served as a culminating highlight of this Island’s culture-packed summer season. Each September we gather the best new films from around the globe, aiming to provide a path to bridge cultural differences and allow an exploration of universal human experiences.

The fun kicks off Tuesday afternoon, September 6, with A FILM ABOUT COUPLES (Dominican Republic) a dramatic comedy about a pair of film makers tangling with their marital problems while trying to make a movie about love. In the evening, shoe lovers and anyone who adores a great immigrant success story, will relish the chance to see the Italian documentary SALVATORE: SHOEMAKER OF DREAMS, about the legendary Salvatore Ferragamo.

From Spain comes OFFICIAL COMPETITION in which a billionaire businessman in search of fame and social prestige decides to make a unique, groundbreaking film. To achieve this goal, he hires the best of the best: A stellar team consisting of famous filmmaker Lola Cuevas and two well-known actors who boast not only an enormous talent, but also an even bigger ego: Hollywood star Félix Rivero and aging theater thespian Iván Torres. They’re both legends, but not exactly the best of friends. Through a series of increasingly hilarious tests set by Lola, Félix and Iván must confront not only each other, but also their own legacies.

This is the closing night film followed by The Closing Night Party!

On Wednesday, September 6, you can HIT THE ROAD with a new Iranian film that transforms the road-trip genre into something raw and moving. That evening do not miss PINK MOON, the Tribeca award-winner from the Netherlands.

Thursday, it’s the official opening party! Enjoy drinks and appetizers from the renowned Goldies. Immediately following, you can stroll over to the Film Center for the movie BROKER, the new film from Korea featuring Song Kang-ho, last seen in the Oscar-winning “Parasite.”

BROKER from Korea will screen Thursday, September 8th at 7:30 pm. Directed by Japan’s Kore-eda Hirokazu, the Korean-language BROKER scored a best actor prize at Cannes for male lead with PARASITE star Song Kang-ho. Playing like a scrappy road movie, more than a crime story, the film tells the tale of two chancers who are trying to arrange an adoptive home for an unwanted infant, the child’s mother who tags along, and two women police officers on their trail.

On Friday, September 9, you can choose from a film smorgasbord. First there’s WAITING FOR BOJANGLES, a French romantic dramatic, followed by the thrilling Guggenheim Foundation fellow Signe Baumane, here to show her animated feature MY LOVE AFFAIR WITH MARRIAGE, which infuses music and science into a personal love story. Then it’s our annual INTERNATIONAL SHORT FILMS JURIED COMPETITION. Come see the 10 finalists and learn who our expert jury selected as the best overall.

Saturday, September 10, starts strong with UTAMA, the moving tale of an elderly couple up against the Bolivian environment, a film that racked up awards including a grand jury prize at Sundance. And then Saturday afternoon—whoa-ho!—it’s the return of the “king of indie animation” with BILL PLYMPTON’S WORLD OF ANIMATED SHORTS. Don’t miss this special event with Oscar nominee Bill Plympton who’s been amusing (and startling) Vineyard audiences and the world for years. Saturday night don’t miss Italy’s THE GOOD BOSS, winner already of 30 awards, including “Best Actor” for Javier Bardem, playing the lead.

Sunday, September 11, there’s another strong line-up, starting with DOS ESTACIONES, a drama about an iron-willed woman determined to save her family’s famed tequila factory. Hop to the other side of the globe with the Israeli tale KARAOKE, and witness a middle-class couple being shaken back to life by the arrival of an exotic new neighbor. (We thank the Consulate General of Israel to New England for co-sponsoring this terrific film that’s gathered multiple major award nominations.)

Our closing night film is OFFICIAL COMPETITION, a comedy about a billionaire in search of creative fame who hires a top filmmaker and two big talents (and even bigger egos). Starring the incomparable Penelope Crus and Antonio Banderas. “Deliciously silly and wildly entertaining,” this film is the perfect way to close out our five days of fabulous film. Or is it? Because you absolutely should not miss our closing night party at FISH MV, on Vineyard Haven’s Main Street.

Welcome to our small island. And to the big world of film. All packed into five very special days.

“We’re so glad you’ll be here to enjoy them with us,”