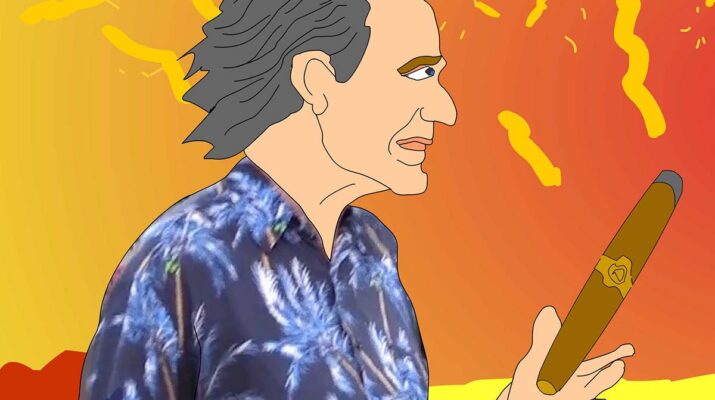 Michael “Mick” Cusimano, a native of Buffalo, New York, and a longtime resident of Cambridge, Massachusetts, died on July 23rd, 2022, after a long battle with brain cancer. He was seventy-one years old.

He is survived by two loving families: his eight siblings and many nieces and nephews, and the people who collaborated with him on his film, theatre, music, and visual art projects in the Cambridge-Boston area. (The latter family includes this magazine; Mick was the staff cartoonist for IMAGINE.)

Here now are remembrances of Mick, from five of the many people who were privileged to have known him.

Mick Cusimano was as wonderful a human being as I ever have been privileged to have known. Every second spent with Mick was fun. Every project with him was a joy. I was so very blessed to have had him as a friend.

I first got to know Mick through IMAGINE, where I was a writer, and he was the cartoonist.

Thus began my entry into Mick Cusimano’s Wonderful World of Surrealism. From his tiny, cramped apartment in (non-Harvard, although he worked there) Cambridge, and occasionally using the facilities of Cambridge Community Television, Mick created a delightful alternative world that mixed animated characters with live-action humans. (I had the supreme honor of being asked to be among the latter.)

Mick was every bit the creative animation auteur that his somewhat better-known predecessors in Anaheim and Burbank were his rooster, who appeared in every one of his productions, was to him what a certain mouse (with a name similar to his) and a certain bunny were to his fellow movie cartoonists in Southern California.

But Mick’s real obsession was ancient Egypt. Pharaohs and pyramids constantly graced his visual imagery and his story lines. Disney could keep its Princesses; Mick’s ideas of royalty were King Tut and Cleopatra.

There were also his mermaids, his gorillas and his bad-guy philistine, Phil I. Stine. If you knew Mick, you got to know and love them all.

But Mick didn’t stop there. He created live shows that would combine music (written by him), animation and theatre. One of his songs was titled ‘Stuck in the Sixties.’ And so he was, but in a good way. Remember ‘happenings,’ such as Andy Warhol’s ‘Exploding Plastic Inevitable’? Mick made them happen all over again. His way.

How I remember, and will forever miss, those Sunday afternoons in Cambridge when, camera in hand, Mick would hand us scripts, tell us what to do and, in so doing, add to his legend. A Mick shoot was like a party you never wanted to end.

If this was a better, saner and funnier world, Mick would have been given his own movie studio, TV network and wheelbarrows full of Oscars and Emmys. He would have to be content, like so many other great American artists, with being far better appreciated in other countries than he was in his own. Film festivals all over the world gave him innumerable awards. (To be fair, so did many in the Boston area.) But Hollywood never called. Too bad. It was their loss—and ours.

As for me, being a member of his entourage was a great award in and of itself. There were many others so privileged; my apologies for not being able to name them all. But I must acknowledge at least two.

One was his late dear friend Dawn Reger. It really broke Mick’s heart when she left us. Mine, too. Dawn was wonderful to know and work with.

The other was his biggest star, Gosia Krzyszkowiak. Gosia was to Mick what Marlene Dietrich was to Josef von Sternberg, Sophia Loren was to Vittorio De Sica and Penelope Cruz is to Pedro Almodovar: his beyond-beautiful muse and inspiration. (Mick cast Gosia as Cleopatra in one of his films. No greater tribute from the Egypt-obsessed Mr. Cusimano could be imagined.)

So long, Mick. Give my love to Dawn. As you two look down on those of us who had the boundless joy of knowing you, please remember, in the words of the wonderful film you made together: DON’T SPILL THE EGGS on us!

Hartley Pleshaw is a radio show host, television producer and writer. He has written for IMAGINE since 2007.

Today we lost the patriarch of our family, my big brother Mike, after a long and courageous battle with cancer.

He spread so much joy wherever he went, and touched the lives of hundreds of people, at Harvard, and all over Boston.

He never complained about anything, and instead made the most of the years he had. He always looked to the bright side of life, which he loved to the fullest.

I will miss you forever, my big brother. I love you very much.

Nick Cusimano is the Showroom Manager at Raymour & Flanagan Furniture in Clay, New York. He lives in Liverpool, New York

Our New England arts scene has lost its “Professor of Surrealism,” Mick Cusimano, after he battled with brain cancer for several years.

Originally, he was given a week to live, but he “forgot to die, and won a film award instead.”

He lived through the Hippie and Beat Generations, and squawked about it, whether reciting his outlaw poetry at his own Squawk Coffeehouse or on tour, or in his writing, cartooning and quirky indie films that mixed live action and animation.

Always a champion of the arts, he was never one to sit on flights of fancy. He ultimately landed in countless international film festivals (including Cannes’s short film corner), winning awards throughout his surreal journey.

He said, “The greatest lie in America is ‘You can’t do something if you’ve never done it before.’” He hammered home the importance of childlike excitement for making things, and made me feel like a peer, even though he was old enough to be my dad. It was important to see an adult being so prolific and imaginative, letting us know that it could be done.

Mick’s vision did not waver over outside opinion, and he wasn’t much concerned with money or fame. Ironically, that is what made him so widely celebrated. He was a genuinely nice guy who consistently did it for the joy.

However, he took his art seriously, and was tenacious in bringing it to its logical conclusion: a gallery, a comic strip, a zine, an open mike, film festivals and, later, in music for the people.

Mick’s Everyman quality is what made him most legendary. At age thirty he bumped into Vincent Price; later, he met Tracy Chapman and Hunter Thompson. He made his first movie at age fifty. He didn’t doubt himself when he stepped toward his next art venture, and he encouraged you to do the same.
Ten years ago, Lawrence Hollie and I met Mick after seeing his art on the TV station where we worked. He befriended us. We acted in and screened films like DON’T SPILL THE EGGS. Mick gave misfits a chance to experiment. He told his story on 82 and 108 of my ExperimentallyILL podcast.

All hail the true underground surrealist! Mick’s vibrant enthusiasm for creating and bringing us together was boundless! His zest for art was matched only by his zest for life, even in the face of sickness.

Michael O’Toole is a filmmaker and podcaster in the Boston area.

My dear friend Mick Cusimano died peacefully yesterday morning after living with brain cancer for four and a half years.

After his operation in February 2018, the surgeons gave him weeks, and maybe a few months (to live). He got back to his routine of making live film animations, graphic art, performing poetry, jogging, biking, helping to run the open mic at Squawk Coffeehouse and midnight dinners at the Cambridge Common with friends.

At some point, I said, “Hey, Mick, what gives?” He said, “The cancer only got my real brain, not my surreal brain.” Mick, a true bohemian and known affectionately as the “Professor of Surrealism,” did not live in his real brain. The doctors kept giving him deadlines. Instead, Mick made deadlines, turned in films and collected nominations and awards: Cyprus, Paris, Toronto, Rome, Boston, etc. The doctors were confounded. The cancer, befuddled, called Time Out. More festivals, awards, ten-mile bike rides, midnight dinners, vacations—lobster & cigars on Martha’s Vineyard—another coin in his bucket.

I knew Mick for thirty-two years, walking into Naked City Coffeehouse on his birthday, September 20th, 1990. He was kind, humble and perhaps the most disciplined artist I knew. He didn’t wait for inspiration; he worked every day. And his muses rewarded him.

Visit his (Facebook) page and take in all the joyful, heartfelt tributes. We need them in times like this.

Richard Cambridge is a writer in Cambridge, Massachusetts.

I remember Mick Cusimano, my friend, filmmaker/cartoonist/poet in Boston, who had a zest for life and art.

After a three-and-a-half-year battle with brain cancer, he was given a week to live and “forgot to die and won a film award instead.”

We met by crossing paths in Harvard Square, Cambridge, after he recognized me form Boston social events. I helped him with films, including a mermaid movie. Gathering to film (with him) was fun on Plum Island Beach, Chinatown, subway stations, the Aquarium, Harvard Square and elsewhere.

All who knew him know how relentless and positive he was! He spoke of his experiences as a beatnik poet, working at Harvard University and attending events around the globe from the Coney Island Mermaid Festival to Paris and Cannes, France.

Overall, he was a nice guy with a heart of gold.

Rest in Peace, Professor of Surrealism.

Karen Ostromecki is an Interior Designer/kitchen designer and actress. She lives in Rochester, New York.

A Celebration of Mick Cusimano’s life will take place in the Boston/Cambridge area in September 2022.